Motl revealed the start of sales in an interview with Coin World senior editor Paul Gilkes at the American Numismatic Association World’s Fair of Money in Denver.

A Proof version of the coin will be offered in 2018. It will be struck at the West Point Mint and bear the W Mint mark. It will have same designs as the 2017 bullion version.

Two of the rarest U.S. coins ever discovered sold for nearly $500,000 at a Heritage sales event held Aug. 2 in conjunction with the American Numismatic Association World’s Fair of Money in Denver. "This was the first time these particular coins were ever offered at auction and collectors were not going to let them get away," said Jim Halperin, Co-founder of Heritage Auctions, which offered the pennies at its auction held during the World’s Fair of Money. "There are each just 10 to 15 of these cents known to exist."

The Lincoln penny is coveted because it was supposed to be made of zinc-coated steel due to copper shortages during World War II but it was erroneously made of bronze left over from 1942. This occurred when some bronze blanks from the previous year became lodged in the trap door of a tote bin used to feed the delivery system of the coin presses.

Beginning in 1943 all U.S. pennies were made from zinc-coated steel. Popularly referred to as “steelies,” these oddities have always been extremely popular with collectors, and the great majority of these steel coins were culled from circulation by 1960. Then there is the 1792 cent, with few known to exist. Research by the auction house revealed it to be a long-lost Birch Cent not seen since an auction in 1890. Coins like this one are referred to as "Birch cents" because the name of the engraver is struck on the coin. This particular coin, which was recently rediscovered in Europe, once belonged to famed collector Lorin G. Parmelee, who sold it at auction in 1890 for just $75. 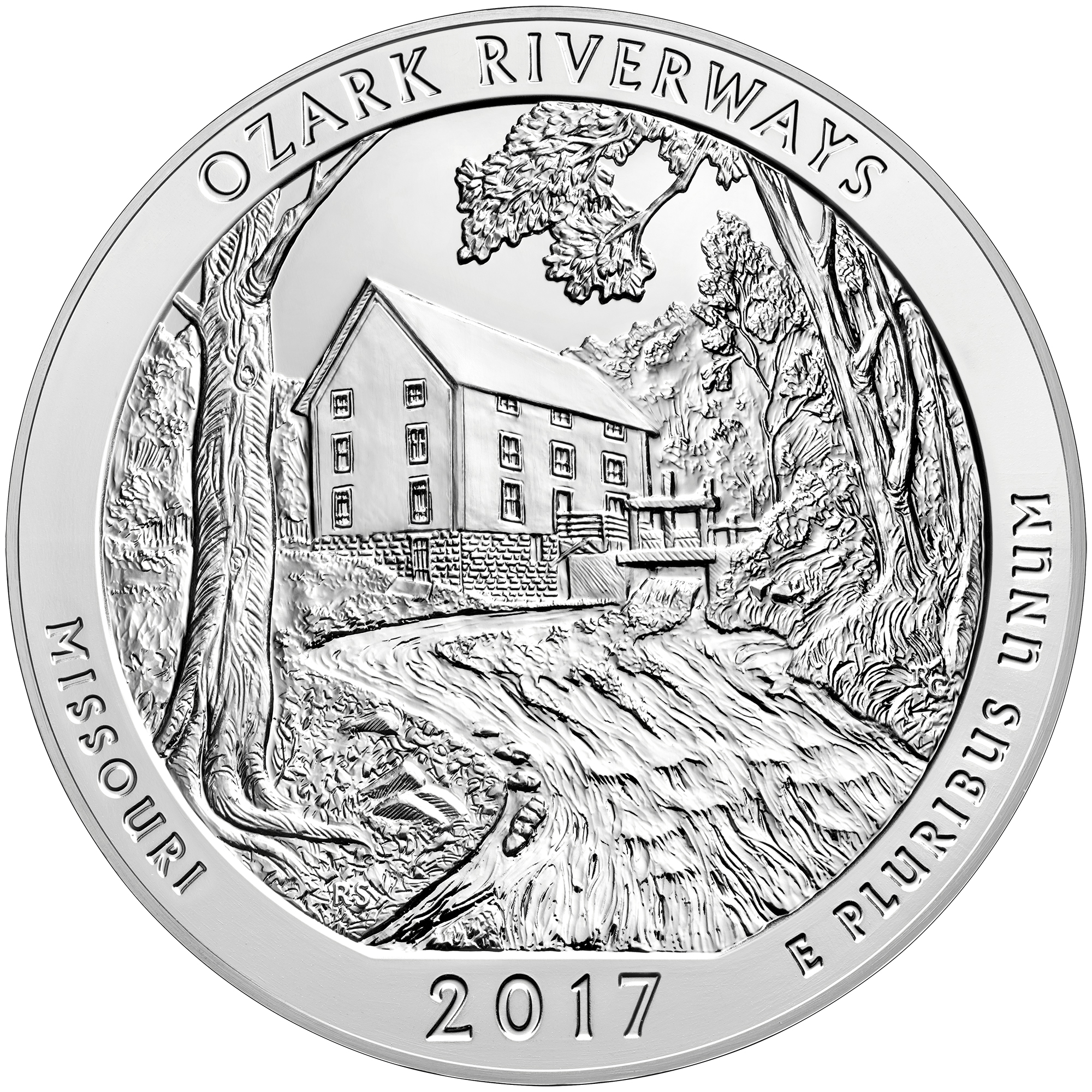 The quarter’s reverse design depicts Alley Mill, a steel roller mill built in 1894. This merchant mill was used to convert wheat into flour. Much of the original milling equipment is still in place, and visitors to the park can tour the mill.

“Vital to the community here a century ago, the mill stands as a tribute to our ability to harness the power of the environment and reminds us of a way of life heavily shaped by the remote and rugged landscape in which it endured,” Mint Senior Advisor Michele Satchell told onlookers.

Ozark National Scenic Riverways is the first national park area to protect a river system. The site encompasses 80,785 acres of unique natural resources, including a world-class spring system that is unparalleled in North America, more than 400 caves, and other special geologic features.

The quarter struck in honor of Ozark National Scenic Riverways is the 38th release in the United States Mint America the Beautiful Quarters® Program, a 12-year initiative that honors 56 national parks and other national sites authorized by Public Law 110-456. Each year, the public will see five new national sites depicted on the reverses (tails sides) of the America the Beautiful Quarters. The United States Mint is issuing these quarters in the order in which the national sites were officially established.

About the United States Mint
The United States Mint was created by Congress in 1792 and became part of the Department of the Treasury in 1873.  It is the Nation’s sole manufacturer of legal tender coinage and is responsible for producing circulating coinage for the Nation to conduct its trade and commerce.  The Mint also produces numismatic products, including proof, uncirculated, and commemorative coins; Congressional Gold Medals; and silver and gold bullion coins.  Its numismatic programs are self-sustaining and operate at no cost to taxpayers. The Mint is celebrating its 225th anniversary in 2017 (#USMint225).

The two coins are among four wrong-planchet Lincoln cent errors — three dated 1943 and one 1942 — that Florida collector Michael Pratt inherited upon the 1992 death of his father, Albert Michael Pratt, a former die setter at the Philadelphia Mint. Michael Pratt says he has no evidence of how the wartime cents came to be in his father’s possession, since he doesn’t recall his father discussing the coins while he was alive.

The intended alloy for Lincoln cents struck in 1943 was zinc-coated steel, since copper was needed for military applications during World War II.

Planchets composed of the 1942 alloy — first of 95 percent copper, 3 percent zinc and 2 percent tin, and later 95 percent copper and 5 percent zinc — presumably remained in hoppers that were eventually filled with zinc-coated steel planchets. The planchets of different alloys were subsequently fed into the coinage presses and struck into coins.

Copper-alloy 1943 Lincoln cents were struck at the Philadelphia, San Francisco and Denver Mints.

With the certification of the two Pratt 1943 cents, the number of copper alloy Philadelphia Mint strikes increases to more than 12. The exact number is not known because of duplicate listings and grading service resubmissions.

The four Lincoln cents certified for Michael Pratt by NGC are:

??A copper-alloy 1943 Lincoln cent with major die break, graded NGC MS-61 brown. The major die break, referred to in the error specialty field of the hobby as a “cud,” occurred when a portion of a coin die broke and separated from the die. During striking, the planchet’s metal flowed into the resultant cavity, creating a raised featureless blob on the resultant coin, in place of the missing design elements. The cud on this piece appears along the truncation of the bottom of Abraham Lincoln’s coat with the bottom border. The NGC Price Guide lists a value of $575,000 for the error.

??A 1943 Lincoln cent struck on a planchet intended for a Netherlands 25-cent coin, graded NGC MS-61. The composition of the planchet is .640 fine silver. The Philadelphia Mint was contracted by foreign governments to strike coinage for their respective countries during World War II.

??A 1942 Lincoln cent struck on a planchet intended for a 20-centavo coin of Ecuador, graded NGC MS-63. The composition is brass.

Quick thinking on the part of a Heritage Auctions staff member led to the discovery of two high-value coins re-entering the marketplace.

Earlier this year Bill Walker, a rare coin specialist in Heritage Auctions’ Dallas office, was approached by a Florida coin dealer seeking to auction five rare coins. Walker began researching the coins and noticed that they all had been offered and sold in the firms’ Florida United Numismatics (FUN) Auction in 2016. The winner purchased seven coins and the Florida dealer was offering five from the purchase.

Realizing that the coins likely did not belong to the same person who successfully won the coins in the auction, Walker delved even further into the matter. Curiously, the dealer was being offered the coins for less than the recent auction records. Walker called contacts in the hobby and then the winning bidder to learn if the coins had been sold following the auction. As expected, the winning bidder denied selling the coins at a loss and only then made aware they had been stolen.

Walker traced the coins’ history and discovered they likely were stolen while on the way to Numismatic Guaranty Corporation by a mail carrier shipment shortly after the auction. They likely were sold then to a Florida dealer, who subsequently offered them to another dealer, who eventually contacted Heritage Auctions.

"I knew these coins could not have belonged to the winning bidder," Walker said. "I thought it was extremely odd that the seller was offering the coins for less than the recent auction price. Come to find out some coins had been broken out of their certified holder."

Thanks to Walker’s work and quick thinking, the grateful owner has so far recovered five of seven stolen coins.

We have caught 2601 shameful hackers.
NukeSentinel(tm)